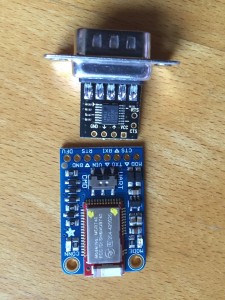 For a while (since the beginning of this project) the option for connecting via bluetooth has been one of the most common requests I’ve had.

When Apple started supporting Bluetooth LE in iOS 5, giving the possibility for apps to use bluetooth devices without the need to be tested and approved before it could be used with an app (along with the associated costs of that), it offered the first glimpses of a Bluetooth solution. The downside was that, getting it working, required a custom “stack” to be embedded in the Bluetooth device, limiting the real world availability.

Since that time however Bluetooth LE devices have matured and it has become possible to buy an “off the shelf” module with an embedded stack that will allow the app to communicate with it. I’m currently evaluating one such device for use with the app and, if it works as documented, will offer this as an option within the app and add the steps required to configure the module to the manual pages.

The two items in the picture are the Bluefruit LE UART Friend and a generic RS232 to UART convertor which should just need a few interconnecting wires between them to connect a MegaSquirt ECU to Bluetooth LE. Total cost for the two was just under £27 delivered. Thanks to Christian for the “heads-up” regarding this module as it’s cheaper and more widely available than the ones I’d previously been evaluating.