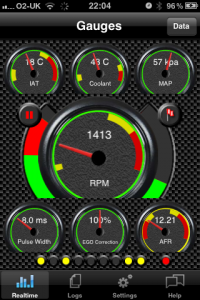 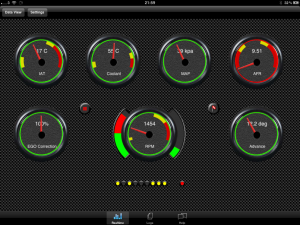 I’ve had some positive feedback around the previous test version and have been working on the iPad views for this new version, particularly clearing up some issues around the log replay views for the iPad.

I think the iPad version is now functionally at the same point as the iPhone version so assuming nothing comes up from the testing of this version it’s looking good for a hybrid iPhone/iPad release to the app store in the next couple of weeks.

Build 261 has been released on TestFlight for evaluation by the registered testers. There are some testers who are signed up who currently don’t have any devices registered, please make sure you register your devices – once you are signed up simply visit the testflightapp.com from your device browser and log in, you will be given the option to register the device at that point. You can’t load or run the test versions of the  app on devices that aren’t registered.

As an interim update I’ve added a new test build to TestFlight which registered testers can access. If you’d like to be added to the list for future test releases you can sign up to TestFlight here… http://bit.ly/vS78u9 – Don’t forget to add your devices so they can be included in the next test build.

The iPhone aspects of the app should be considered as a “Release Candidate” but the iPad views still need a bit of work. The main areas that require testing are the new connection functions and the MS2-Extra support. As per my previous post the connection architecture has undergone a major rebuild and on my test setups I’m seeing massive improvements in the time taken to establish a connection.

The MS2-Extra support was almost working in the previous release version but the logging wasn’t implemented properly and many of the gauges were hit and miss. This latest test version should resolve those problems and both record logs correctly and replay them on the iPhone/iPod platforms.

If the response to this test build is positive and the iPad version looks like it will drag on for more than a couple of weeks then I’ll release an interim version to the app store.

I finally completed the work on the MS2 Extra logging and I’m almost ready to send out a new test version.

I have been undergoing a bit of a code review too. In particular I’ve been re-looking at the architecture I implemented to handle the connections to different versions of MegaSquirt. At the time I first implemented the various classes and their structure it seemed to make sense but the downside seems to be a, sometimes lengthy, delay in establishing and initialising a connection.

As a result of this review I’m in the process of changing the architecture around connection handling and it’s looking very promising with connections being established much more quickly and reliably – typically in around 20% of the time the previous way of doing things took. There are a couple of outstanding things to resolve but on the whole it’s looking good for a new test release and subsequent app store submission in the next few weeks.

The few spare hours I’ve had in recent months have been spent modifying the app to be a “universal” app, running with native views and controls for use on an iPad as well as the iPhone/iPod supported by the current release version.

The iPad version uses slightly different navigation between the various screens and functions. The tab bar used on the iPhone version has been whittled down to 3 options on the iPad as settings have been moved to the realtime gauges view. The extra screen space on the iPad allows the data view to be viewed at the same time as the gauges.

Due to the way the iPad is used it is more important that the app supports different orientations so all the views in the iPad version can be viewed in any orientation. 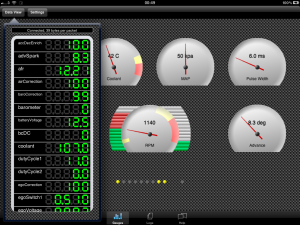 The first release version is likely to be more “functional” than “pretty” as the extra screen size tends to be less forgiving to my pretty poor graphic design skills. Hopefully someone will volunteer something a bit slicker once it’s out there and users have the chance to see how it works.

The MS2-Extra logging functions should also be fixed in this version as well as the various fixes and additional functions that have been added in the test versions since the v1.0 release.