I’m pleased to announce that the first test release is now available for testers who have confirmed their UDIDs, you should receive an email shortly with the download and installation details.

If you wish to be added to the test group and haven’t received the release email, please use the contact form to submit your details and you will be added into the next available release.

As I have started making final preparations for the first test version of the app to ship I’ve been considering the best ways to resolve any problems that arise and to allow users without the suitable interface hardware to be able to try the app out in a demo mode.

To help with this I’ve added a “Raw Data” logging mode to the app which will create a shared file containing the raw data supplied from the MegaSquirt ECU. Once I’ve tested this I’ll send the first test release out to the registered testers that responded to the last email I sent out. Testers will then be able to send the files with a note of the problem encountered and I should then be able to reproduce it.

I’m also developing a simple “server” application to run on one of my web servers that will mimic a MegaSquirt connection and respond with raw data captured from the app. As well as giving an easy way to provide a demo facility it will also allow me to simulate tester’s MegaSquirts on my private server so I can review and resolve any issues reported. The demo server will be launched sometime after the test app is shipped , I’ll notify all testers by email with the details when it is available. Initially you’ll need to enter the IP address and Port number into the settings screen, in the final version I’ll probably just have a “demo” switch that sets it up for you.

As support for each version of MegaSquirt is added I’ll add a demo service for that configuration that will be used as the baseline for regression testing of the app as new versions are released.

I’ve added a forum to the site to make it easier to discuss any issues relating to MobiSquirt. There is a private/hidden section for testers who have signed up for the app where the app will be available for download as new test versions are released.

The first test version is very nearly ready with the logging playback facility now working and nearly all the bugs I’ve found in my own testing resolved. There are a couple more changes I’d like to make before it’s released to testers but I’m anticipating releasing it in the next few days unless I find any major issues.

As previously posted the first test release has been optimised/tested for MS1-Extra, it may work with other versions but more by luck than judgement ! 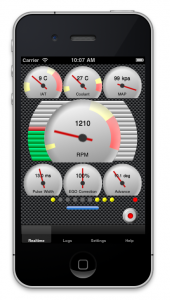 As mentioned in the comments, spare time has been a bit of a luxury in the last few months as a number of paying jobs and motor sport commitments have taken their toll. Things are finally easing off a bit now though and I’ve finally managed to get some more time in on MobiSquirt and now is as good a time as any to review the progress so far and make some changes to the development roadmap.

I really want to get a version of the app out there for those interested in testing it and the reality is that the more versions of MegaSquirt I try to support in the first test version the longer it will be before I can send anything out. As a result I’ve decided to concentrate on MSnS-Extra for the first test release as this seems to be the most widely used firmware among those that have expressed an interest. Once that is out I’ll then get the MS2-Extra running, then MS2, then MS1, then MJ.

MSnS-Extra support is complete now as far as the realtime gauges/data views are concerned and the logging is working. I have a couple of UI tweaks to do still but the realtime aspect is probably 98% ready for test release 1. The log review/playback functions still need a fair amount of work to get into reasonable shape and, for the first test version, I expect to have both data and gauge log playback views functional.

I will add a “mark” facility/button for realtime logging and, for devices that support it, the “mark” will also record your location so a map can be displayed showing where you were when the mark was created. As part of that work I will add latitude/longitude fields into the log files as well as the existing acceleration/deceleration fields.

I’m going to add a forum facility to this site to allow testers/contributors etc… to exchange information, report any bugs/feedback, new feature requests and so on. Test versions of the app will be posted there too for download as and when I release them.

I won’t tempt fate by giving a timescale on the first test release, hopefully, it will be sooner rather than later !

Finally got word that the two MSII daughter cards I ordered have cleared customs and are finally on their way to me. Thanks to those that have donated so far for numbing the financial pain of buying them a bit !

Having two daughter cards pre-loaded with v2 and v3 MS2-Extra should speed up my testing substantially.

As a bit of distraction therapy from wading through MegaSquirt .ini files I decided to put together an initial icon for the app. It will do the job for the moment, if anyone wants to submit something better please do so, don’t worry about the 3d gloss finish as that is added by iTunes.

It’s been a while since the last update but things are still progressing slowly but surely.

I’ve finally completed the MS2-Extra implementation and the app is now happily logging and displaying data more or less as it should do. There’s a problem with the throttle position input that I’m trying to pin down but at least the grind of coding all the data mapping and logging is done which is a relief !

I’ve had a few people sign up for testing and some donations are starting to arrive. The donations are being put towards a spare MS2 daughter card for my test setup at the moment as that will allow me to test both version 2 and version 3 firmware by swapping the daughter card rather than having to keep reloading different firmware. I’m still a little way off sending out a test version of the app so if you’ve signed up as a tester don’t worry too much if you don’t hear anything for a while. I will try and acknowledge all test requests within a week or so, it all takes time so please be patient 🙂

The first versions of the app worked well with MS1-Extra because that happened to be the ECU configuration I had on the bench when I started development. Over time though the design of the data engine has caused some issues when trying to support other firmware versions.

I’ve made a start now on breaking the comms and interpretation part of the app apart to make coping with different transport layers and different firmware versions much simpler in the long term. In the short term the app is in a pretty sorry state but I think a few more evenings work and I’ll have it back together again and running.

As part of this process I’ve looked at leveraging the transport layer into a class of it’s own too. That should go a long way towards resolving the problems of running with a log file as a data source, making the gauges and various data views work with a saved log file. That also allows a “demonstration” mode which can use a log file embedded in the app bundle.